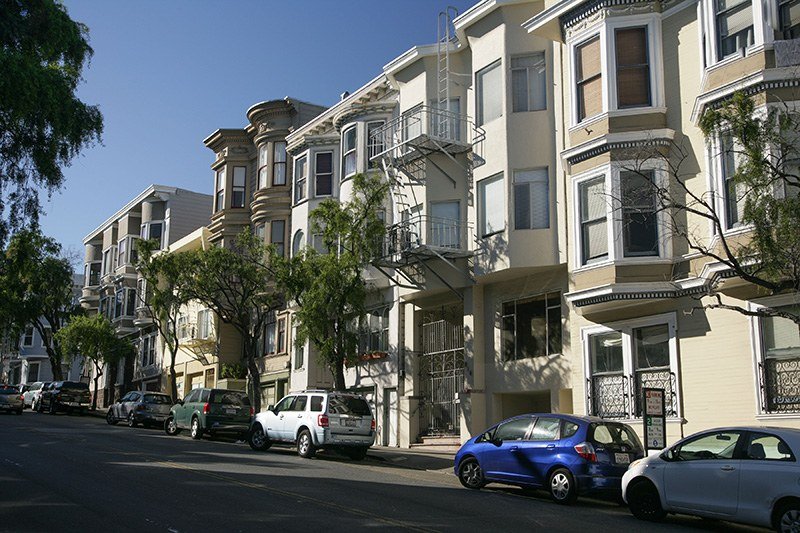 Duboce Triangle is one of the sunnier neighborhoods in San Francisco. It is protected from the fog by the Buena Vista and Twin Peaks neighborhoods to the west. The area is an allure for those who desire car-free urbanities and is served by the Church Street Muni station. Contemporary restaurants and ritzy shopping is available on Castro, Mission and Haight streets.
The Edwardian and Victorian flats and condos in Duboce Triangle epitomize the best of their eras. Majority of homes here affords its residents stunning visuals of Twin Peaks, Buena Vista and Corona Heights districts from their sunny walk-out decks.
The city remodeled the entire neighborhood of Duboce Triangle in the 1960s by planting street trees, burying utility wires underground, expanding the narrow sidewalks and streets. Today, with its fully-grown trees and refurbished homes, Duboce Triangle is clearly residential and cosmopolitan.
In the evenings, residents go for dinner at one of the many nearby bistros and bars available. The eateries on Market Street offers burgers, Indian cuisine, sushi and everything in between. The Haight Ashbury district which was once the center of the hippie culture and currently home to many hip restaurants, top-notch classic clothing stores and a number of exclusive boutiques is just a short walk away. Just south of Duboce Triangle is Castro Street which caters towards the LGBT community with its eateries, bars and bookstores which are one of a kind.
Duboce Park is at the center of Duboce Triangle. It is a rectangular chunk of green space which is dearly loved by the locals and their dogs. The Buena Vista Park is close-by. It is stocked with trees and is another great place to take a dog. It has abruptly paved and dirt paths, winding wooden stairs and visuals of the Golden Gate Bridge and Marin Headlands.